Facebook has been facing growing concerns over a number of years about the complications of it’s privacy settings and just a few years ago Facebook founder Mark Zuckerberg even claimed that privacy was “no longer a social norm”.

Well that was before the Snowden revelations and now online privacy is a hot topic. In fact you could argue that privacy is as hot today as “sharing” was four years ago. And Facebook has shifted its focus quite markedly in the past six months. 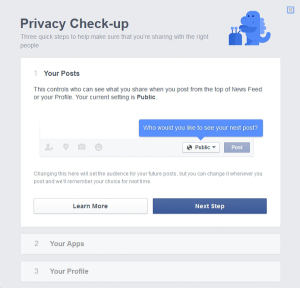 In April members were able to verify their identity to apps and websites without giving away personal information. And in May they quietly changed the default for new members posts from ‘public’ to ‘friends’.

And now, for all users, we have the Privacy Dinosaur and its three quick steps Privacy Check-up. Always available and to be run at any time, you can access the new tool from the ‘Privacy’ icon in the top right corner.

It’s a very simple three-step process to limit your profile data access to third-party apps, the general public and also define your sharing constraints. You can change your settings on who can see your posts, which apps are authorised to access your account, and which users are able to see your profile information.

It’s a good step in the right direction.