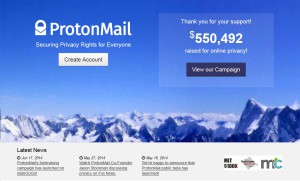 The ProtonMail campaign has now raised $550,492 way ahead of the original $100,000 goal and that should ensure more development and hopefully access for more users around the world.

The encrypted email system was developed by researchers at CERN in response to the NSA surveillance news and Edward Snowden revelations last year.

ProtonMail, a gmail-like email system which uses end-to-end encryption, making it impossible for outside parties to monitor. Unlike other encrypted email systems the data is encrypted on the browser before it comes to the ProtonMail server but they don’t have the encryption key and so can’t access the content or allow anyone else to.

ProtonMail utilizes a two password system, where ProtonMail does not have access to the user’s second password. This means users’ encrypted data is still safe even if an attacker somehow reads the data on the server.

The servers are in Switzerland which will increase privacy because the Swiss government doesn’t seize servers or tape conversations This will help avoid a situation where the U.S government could forcibly shut them down, similar to what happened to Lavabit last year.

As news of the email service got out following the launch in beta on May 16 so many people signed up that its servers maxed out. It’s now looking to increase capacity and will reopen for signups soon. Let’s hope the money raised via crowd funding will speed this up.

If you believe in online privacy (and that’s why you’re here, right?) then you’ll want the ProtonMail project to succeed as much as we do. Sign-up for an invite here.

Check out the latest update from the ProtonMail team:-